From some comments to the blog:

"They [Russians] have to get a real economy and a real military before they do that.They are in no position to attack now - they are a shell of what they once were. But still nasty guys"

Secondly, from an anonymous source, citing [??] the web site:

It is exactly this which the American people don't get.

Military exercise to train for the real McCoy.

I know because I know how they think because before I defected from communist Czechoslovakia I had to serve in Czechoslovak Air Force, we had Russian KGB terrorist training camp at the airport.."

By: Dr. Thomas Ferleman
A graphic, showing: "the Figure 1. Top Ten Most Powerful Countries" as projected to be in the year 2020. 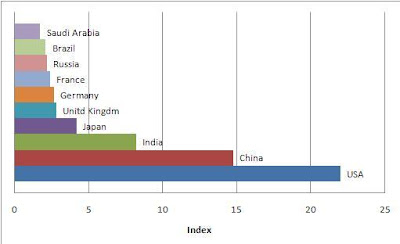 Criteria for the rating scheme based upon:
* global GDP
* population
* a measure of technological sophistication (with GDP per capita as a proxy)
* government size,
* military spending,
* conventional power
* nuclear power
Read the entire article the graphic obtained from: http://www.ferleman.com/us-russia-relations-rising-likelihood-of-conflict/
"by 2020 Russia will rank as the ninth most powerful country in the world. While there remains a significant distinction between the great power status of the U.S. and Russia, it would be wrong and possibly risky to view Russia as anything less than a great power."
Well stated! Oil revenues, wisely spent, and I stress wisely spent, could enable the Russians to assume a much more dominant role on the world stage. Time will only tell.
coolbert.