From the Chicago Tribune yesterday;

"Brigadier Mark Carlton-Smith, commander of Britains' forces in Helmand province saying he could use as many as 4,000 additional troops to help stabilize that battle-scarred southern Afghan region." 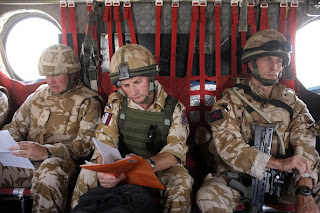 [Brigadier Mark in the center of the photo, reading the orange folder!]

The damned Taliban are back, and with a vengeance, most pointedly of all in the southern part of the country [Afghan], that area the responsibility of which is the mission of non-American NATO forces.

Here, from a variety of British sources, comments on the detiorating situation in Helmand province, Afghanistan:

"The commander of British forces in Afghanistan [Carlton-Smith] has told Sky News he needs double the number of soldiers to cope with the increasingly tough fight against the Taliban."

"The TICs (Troops in Contact Reports) sent to the headquarters staff are now so regular that they have to prioritise the level of support those soldiers on the ground can have."

"Air support, which you pray for when the fighting starts, is limited - there simply aren't the planes and helicopters to send out. Even if you are assigned a jet fighter it is just as likely to be redirected to a more serious incident, especially if the TIC involves a casualty."

"How to win Helmand"

"Elected politicians take the decisions in the British set up, they make policy too, but it is pretty clear that they are heavily dependent on their civil servants or military officers to define their choices."

"The senior British commander in Helmand has publicly requested a major troop reinforcement in the war-torn province to deal with the growing Taliban insurgency . . . In a highly unusual step Brig Mark Carleton-Smith said he needed to double the force with 'another brigade of 4,000 men' to deal with the Taliban reinforcements crossing the border from Pakistan."

Ever since the United States invoked Article Five of the NATO charter in the immediate aftermath of 9/11, the Afghan war has been waged as a NATO operation. Twice as many NATO troops [from a variety of nations] other than American have been now killed in Afghan since 2001! NATO contingents are making a game effort, and contributing in a manner not appreciated by the U.S. public [your reporter not included].

As for: "there simply aren't the planes and helicopters to send out"!

HOW CAN THIS BE??!! THERE SHOULD BE AND MUST BE, A STANDING COMBAT AIR PATROL, DAY AND NIGHT, ALL WEATHER, OF AC-130 GUNSHIPS, READY TO SUPPORT ANY AND ALL NATO AND AFGHAN FRIENDLIES THAT REQUIRE ASSISTANCE WITH CLOSE AIR SUPPORT!!! A MUST!! NOW!!