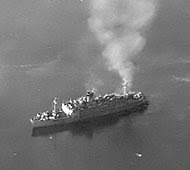 "The term hell ship mainly refers to the ships used by the Imperial Japanese Navy to transport Allied prisoners of war (POWs) out of the Philippines, Hong Kong and Singapore during World War II. The POWs were taken to Japan, Taiwan, Manchuria, or Korea to be used as forced labor"

Hell ships is the correct term. Persons locked in the hold of a cargo vessel, for many days, given little or no water or food, stifling, very overcrowded, toilet functions done where you squatted or stood!

Many persons dying during the voyage to Japan. Some killed when their ships were sunk by allied submarines. Persons who were normally left in the water by the Japanese! Death by drowning, exposure to the elements, etc., being a release from terrible torment!!

Here is a more or less a complete list [??] of the hell ships used by the Jap during the war: [that there were so many is a surprise!!??]

NO discussion of "hell ships" would be complete without a mention of the Junyo Maru:

"The Junyō Maru was a Japanese cargo ship (one of the "hell ships") that was sunk by the British submarine HMS Tradewind, resulting in the loss of over five thousand lives."

[compared to this, the sinking of the Titanic is a nothing??]

"When it was attacked and sunk on September 18, 1944, by the Tradewind, the Junyō Maru was packed with 1,377 Dutch, 64 British and Australian, and 8 American prisoners of war along with 4,200 Javanese slave labourers"

ABOUT 80 % OF THOSE PERSONS PERISHING WHEN THE JUNYO MARU WAS SUNK WERE ASIANS!! UNFORTUNATES IMPRESSED BY THE JAPANESE TO PERFORM SLAVE LABOR!!

NOT ONLY ALLIED PERSONNEL SUFFERED AT THE HANDS OF THE JAPANESE!! On occasion, maybe more than on occasion, Asians suffered even FAR WORSE?

Thank GOD for the atomic bomb?