From the wiki entry on the battleship USS New York:

"The fifth USS New York (BB-34) was a United States Navy battleship, the lead ship of her class of two (USS Texas (BB-35) being the other). Her keel was laid down 11 September 1911 by Brooklyn Navy Yard of New York City." 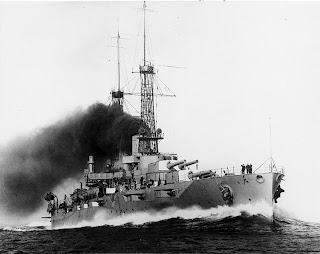 Carried impressive armaments and armor. To include:

Saw yeoman duty during both World Wars. Earned three battle stars during the Second World War. I cannot say with certainty, but this is perhaps one of the old-fashioned battleships of the era that was intended to be used as armored pillboxes during the invasion of Japan, if such an event had actually occurred. Battleships, sporting 14" guns, were to be beached at the invasion sites, skeletal crews ONLY remaining aboard, firing those big naval guns in support of the American ground forces that had gone ashore. Ammo, food, beans and bullets brought to the ship as needed.

Dig this amazing stuff too about the last days of the USS New York:

* Participated in: "Operation Crossroads, the Bikini atomic tests"
* Survived: "the surface blast 1 July and the underwater explosion 25 July"
* Finally met a gallant end: "towed out to sea some 40 miles and there sunk after an 8-hour pounding by ships and planes carrying out full-scale battle maneuvers with new weapons."

Was exposed to and survived two atomic detonations. ONLY sunk after being repeatedly pounded for eight hours by the most advanced of post-war munitions!!

It would perhaps IMPOSSIBLE to build another battleship of the USS New York class again. Prohibitive from the cost standpoint and too difficult to obtain the necessary armor plate in the quality and quantities needed!!

They just do not, and cannot, build em' like they used to!!