That was a new one on me. I had thought Osprey was strictly Marines. But this is not the case.

Osprey in the USAF inventory as a special operations type aircraft and for some time now.

"The Air Force's first operational CV-22 Osprey was delivered to the 58th Special Operations Wing (58th SOW) at Kirtland Air Force Base, New Mexico on 20 March 2006. This and subsequent aircraft will become part of the 58th SOW's fleet of aircraft used for training pilots and crew members for special operations use." 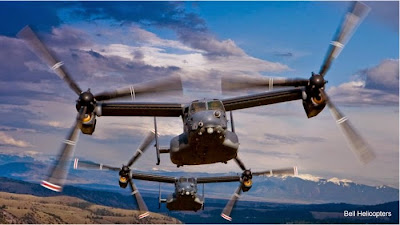 The two Osprey flying in such close proximity so close, one behind the other is dangerous? So the USAF seems to have deemed to be the case: "In August 2012, the USAF found that 'CV-22 wake modeling is inadequate for a trailing aircraft to make accurate estimations of safe separation from the preceding aircraft.'"

Osprey with extra fuel tanks for extended range and DOES HAVE an in-flight refueling capability. Long-range with global reach.

Indeed, that recent hostage-rescue mission to Syria involving the Osprey of AFSOC:

"On 3 July 2014, V-22 aircraft carried Delta Force commandos to a campsite in eastern Syria where Islamic State militants had held American and other hostages. The commandos quickly eliminated the militants at the site, but found that the hostages had been moved elsewhere and returned home empty handed."

Osprey makes a lot of noise in comparison to other rotary wing aircraft? Anyone know about this? Special operations type missions quite often rely on stealth, silence being golden and much appreciated!