Devoted readers to the blog will remember from a number of years ago now the incident where the American nuclear attack submarine USS San Francisco collided with an undersea mountain.

The warship at that exact moment of collision traveling at high speed [30 knots] and moving in a manner as if there were not obstacles in the path. Open ocean supposedly and no need for active sonar.

The vessel nearly sinking, CASUALTIES FROM THE COLLISION 100 %!! 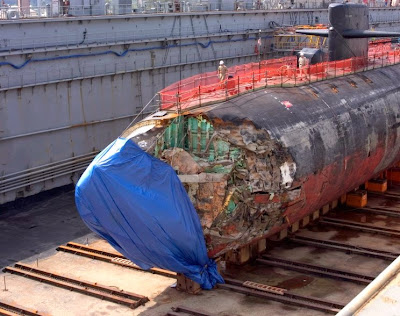 Vessel in dry dock awaiting repair. You can see how extensive the damage was. BUT was repaired.
Such "incidents" not so rare as we might expect? NOT so common but NOT so unusual either.

From: "Blind Man's Bluff" by Sherry Sontag and Christopher Drew.

"Seawolf had knocked herself out of the fleet rotation by ramming an undersea mountain in the Gulf of Maine, badly crushing her stern." [this too in 1968]

"In September 1977, Commander F.J. 'Buzz' Galbraith of the USS Ray (SSN-655) knew he was operating at a disadvantage. His navigation equipment was in need of repair, his crew was green, and Ray was going to the Mediterranean . . . [where] shallow waters, tricky currents and changing temperature layers made if difficult to navigate . . . his sub drifted 14 miles off course and slammed into an undersea coral mountain. . . . It hit so hard that men were hurled into bulkheads, the auxiliary diesel engine shifted on its mounts, and the steel cone covering Ray's sonar system was crushed."

Of course the U.S. Navy would neither confirm or deny, but those nuclear attack submarines during that period of time more than likely carrying SPECIAL WEAPONS! To mean nuclear tipped torpedoes.

NO DOUBT about it. Submersible operations even during peacetime fraught with great danger in all instances. Nuclear boats in particular operating at very high speeds, submerged at depth and often no real chance for recovery in a critical situation!

I was a spook aboard the Ray when she hit the mountain. I was sitting in the sonar equipment space and was thrown the length of the space. Anything and anybody not tied down was a projectile. After blowing to the surface the damage to the bow made max speed 8 knots. Don't know which was worse the Ray or flooding on Greenling on another Med run.