ANYONE AWARE IF THE SOVIET/RUSSIAN Su-24 has a midair-in flight refueling capability?

Among those aircraft as taking part in the latest Russian war-games in the Far East we find Su-24 Fencer!

Variable geometry as they call it, wings can be swept forward to back depending on the mission, tandem seating, terrain-following radar, etc.

Fencer analogous to the American F-111. Indeed, the Su-24 warplane appears from outward appearance seems to be a clone of the F-111. 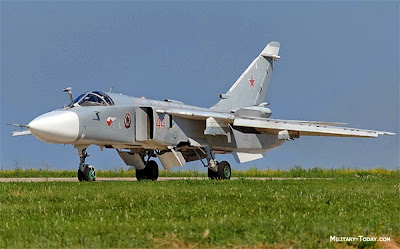 Those long-range Russian bomber aircraft approaching American airspace during Vostok 2014 not accompanied by Fencer. Bombers and tankers yes but not Fencer.

My thought was that an combined long-range aerial attack force the vanguard of which might be Fencer in the ground attack role. A combined Russian air force attack unit consisting of Bear, Backfire, Blackjack, Midas, Mainstay, and Fencer .

A supersonic, terrain-following, low-level dash by Fencer aircraft in the SEAD mission in advance of the long-range bombers might be desirable. Fencer firing short-range attack missiles [SRAM] at early-warning [EW] and ground-control-intercept [GCI] radars.

American air defense assets depleted, that mission of the long-range bombers that much easier.

And as for the question of Fencer having an in-flight refueling capability, the answer is YES!!