"goblin - –noun a grotesque sprite or elf that is mischievous or malicious toward people."

Here is the Goblin. The experimental parasitic fighter [XF-85] to have been carried by the B-36 long-range bomber aircraft.

Provide fighter escort for the nuclear armed intercontinental bomber to and from the target. Carried UNDER and INSIDE the B-36 "mother ship"! Could be released for combat flight and then recovered for return!

A concept that appears to have a degree of merit, but NOT that much?

ONLY a concept that never came to fruition.

The B-36 long-range bomber was - - during the 1950's - - the mainstay, of the American nuclear deterrent force. The first long-range bomber that had intercontinental reach - - armed with thermonuclear [hydrogen] bombs. A "cross", a half-way design between the B-29 and the B-52 bomber aircraft. A finicky hybrid that satisfied almost no one.

"The Convair B-36 'Peacemaker' was a strategic bomber . . . operated solely by the United States Air Force (USAF) . . . The B-36 was the first bomber capable of delivering nuclear weapons from within a fully-enclosed bomb-bay . . . the B-36 was the first operational bomber with an intercontinental range"

[an intercontinental-range, however, that was ONLY possible when the bomber aircraft was not loaded, unarmed!!]

And was very susceptible to intercept and shootdown by Soviet jet fighter interceptor aircraft. Required protection to and from the target. Protection that was more or less unavailable at the time. The parasitic fighter [Goblin] was at the time as a "possible" - - a solution - - even though fully acknowledged as an experimental concept!

"The McDonnell XF-85 Goblin was a fighter aircraft, conceived during World War II and intended to be carried in the bomb bay of the giant Convair B-36 bomber as a defensive 'parasite fighter'. Because of its small and rotund appearance, it was nicknamed 'The Flying Egg.'"

"The McDonnell XF-85 Goblin was designed to meet a USAAF requirement for a single-seat 'parasite' escort fighter that could be carried by a large bomber."

This particular photo shows NOT the Goblin as suspended from the B-36 bomber.

The Goblin flew in prototypes only and was found to difficult to dock [docking attempted to a B-29 and not a B-36!]. THE THING JUST DOES NOT LOOK RIGHT! As I have said before, you are reasonably able to infer from the appearance that the Goblin would just NOT WORK?! 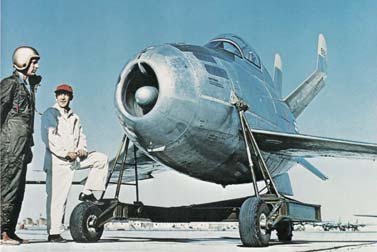 An appropriate caption for this graphic would be: "I am expected to fly THIS??!!

The Goblin was not a good idea? If it does not look right, it probably is not right? One itty-bitty fighter accompanying a single long-range bomber on missions to the Soviet Union would probably have never been very effective anyhow!

Early in the game, after some initial and lackluster testing, the entire Goblin project was cancelled. "The cancellation was the result of a number of factors":

1. "Docking with the bomber 'host' proved much more difficult than thought"
2. "The XF-85 was no match for the conventional enemy fighters"
3. "The increasing range of jet escort fighters"
4. "Tight budgets [discontinued program]"