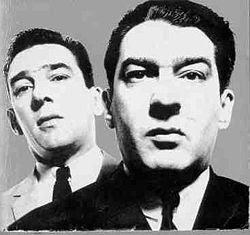 A repeated theme throughout my blog is that criminals do not make good soldiers. Persons, quite often given over to violence, creating mayhem on a habitual basis, when inducted into the military, prove to be poor material for the "profession of arms". Undisciplined incorrigible persons that for the most part have very few positives but do possess a whole lot of negatives. NOT worth the effort, time, money spent on them.

Have a bad tendency not to conform to military discipline but rather only continue their criminal ways. A sure indication of a mentality that is warped, anti-social, sometimes malevolent, possibly even egregiously so!

Such were the Kray twins.

English criminals of bad repute. For a time, the number one bad-guy English organized crime figures. Even as young men, displayed marked criminal and sociopathic behavior, and all the while IN THE BRITISH ARMY! These blokes are the archetype of the person you do not want to induct into the military.

"Reginald "Reggie" Kray . . . and his twin brother Ronald "Ronnie" Kray . . . were the foremost perpetrators of organised crime in London's East End during the 1950s and 1960s"

The Kray twins, violent, and somewhat skilled at using violence, amateur boxers of some ability!

"their grandfather, . . . led both boys into amateur boxing, . . . they achieved some success. They are said never to have lost a bout before turning professional at the age 19."

But - - while performing the English National Service [drafted into the military] - - behaved in a hooligan fashion that was anything but admirable.

Repeated criminal offenses while in the army, their bad behavior continuing markedly so even when incarcerated.

"in early 1952 they were called up for National Service [Army]."

* "They deserted several times"
* "While absent without leave, the twins assaulted a police officer"
* "beat . . . up one of their training sergeants and absconded"
* "They ended up being jailed in the Home Counties Brigade Depot"
* "they tried to dominate the exercise area"
* "They threw tantrums"
* "upended their latrine bucket over a sergeant"
* "dumped a dixie full of hot tea on a guard"
* "handcuffed another guard to the prison bars with a pair of stolen cuffs"
* "burned their bedding."
* "escaping from the guardhouse and being recaptured by the army one last time."
* "assaulted [a] guardsman with a china vase."
* "On one occasion, Ron climbed into the prison rafters and, according to one guard, refused to come down for some six hours"

With regard to this "climbing" incident, this is used as evidence that at least Ronnie Kray was suffereing from the onset of some sort of mental illness. However: "It is not clear whether at this stage it was another prank to annoy their guards"

[my intuition tells me this was a deliberate prank, feigning mental illness all the while!]

* they were given a dishonourable discharge from the service

Post-discharge, the Kray twins began a life of serious criminal endeavor. Were IDOLIZED AND HERO WORSHIPPED BY SEGEMENTS OF THE ENGLISH PRESS, always in the headlines. One brother like to cultivate the image of the lady-killer, the womanizer who was constantly wining and dining and making love to the beautiful women. Truth was that the man was a homosexual! Both men also post-discharge spending long periods of time in prison, their life-of-crime being so pronounced that they were considered a serious menace to all of society.