"a very simple, rapidly produced small fighter aircraft . . . This Miniaturjäger (Miniature Fighter) program was to use the simplest and cheapest power plant available, and to have the minimum of strategic materials and practically no electrical equipment."

Simple, quick, dirty, but effective air defense weapons designed to defend the Reich against the massed and over-whelming in terms of numbers strategic bomber forces of the western allies during WW2.

"A single . . . pulse jet engine . . . was mounted on the top of the fuselage . . . takeoff was achieved by the use of two detachable solid-fuel rockets . . . takeoff was to be on a droppable takeoff dolly and landing was to take place on a retractable landing skid . . . The pilot sat under a bubble canopy . . . that afforded good all around vision" 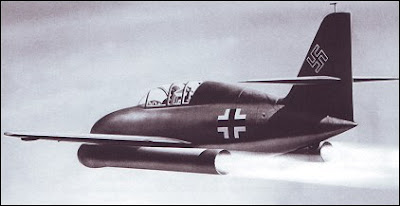 A parasitic fighter, accompanying long-range German bomber aircraft into battle. Towed behind or MOUNTED ATOP the mother-ship [German bomber], released for combat when encountering allied fighters!

"A parasite fighter is a fighter aircraft intended to be carried into a combat zone by a larger aircraft, such as a bomber. If the bomber were threatened, it would be able to release the parasite to defend itself."

"The tiny fighter was to have been propelled by pulsejets"

"The Messerschmitt Me 328 was originally designed as a parasite aircraft to protect Luftwaffe bomber formations . . . a wide variety of other roles were suggested for it . . . [also] consideration as a selbstopfer (suicide weapon or kamikaze) aircraft"

"Its construction was to be mainly of wood."

Again, cheapness was a major consideration in the developmental stage of this aircraft!!

The pulse-jet engine was looked upon with great favor by German designers? Seemed to satisfy a lot of requirements that could not be otherwise met but with the greatest of difficulty. High-speed, cheap, low-maintenance, outstanding-performance not obtainable from any other aeronautical power plant.

"The pulse-jet was evaluated to be an excellent balance of cost and function: a simple design that performed well for minimal cost. It would run on any grade of petroleum"

[the internal combustion engine as a source of power for propeller-driven military aircraft as used by the various combatants during WW2 had reached a more or less apogee of development. Further improvements were possible ONLY in slight increments and then ONLY with the greatest of difficulty!]

The pulse-jet was of course used very successfully as a power-plant for the V-1 "buzz-bomb". The "doodlebug" - - an unmanned cruise missile!

Pulse-jets, however, were found to be unsuitable for MANNED fighter aircraft!

Pulse-jets had some obvious deficiencies in addition to positives. Negatives to include:

And - - most significantly, the pulse-jet engine had one most glaring drawback:

* When sitting idle on the ground, even when fired-up, the pulse-jet was INCAPABLE of providing enough thrust to get an aircraft airborne. NOT until the flow of air into the pulse-jet intake was at operating speed [several hundred miles per hour?] could the engine [pulse-jet] develop enough thrust to propel the "aerial machine" forward in an autonomous manner!

ONLY by using some sort of auxiliary power plant for propulsion were these German pulse-jet powered aircraft, including the V-1, able to get airborne!

The Ju EF126 became a "going" concern under the auspices of the Soviets, post-WW2 [1948], but only in an experimental version and then shortly there after scrapped!

Pulse-jets today are strictly within the purview of the model airplane enthusiast? Scale-model aircraft that can achieve extraordinary speeds and levels of performance not ordinarily possible for the amateur!

I wonder, if the pulsejets of the time couldn't provide takeoff power, could a hybrid pulsejet+ducted-fan (a sort of motor jet-ish) where the ducted fan feels air to and around the pulsejet using an engine just strong enough to get the plane off the ground, and as speed rose, the ram-jet effect of the pulsejet would begin to take over and the piston engine would now be assisting the ramjet. Of course, this adds lots of weight and complexity. Which it definitely not the goal of this design. The next possible option would be to use a mothership to launch several at a time. Using whatever bombers or transport aircraft where available and mounting the fighters above or below the wings or fuselage. The fighters would be lifted into the air by the carrier plane and once up to speed, launched. They would then return to base and land normally after their mission. Due to how small and light pulsejet fighters could be, it might even be possible to have a pulsejet fighter piggy back on a slightly modified fighter such as BF109 or FW190 etc.. and shortly after takeoff, the two would separate and continue to the mission. The jet fighter would have a faster climbing speed over any propeller driven launch plane and engage the enemy first, however, if carried up on top of a ME262 the parasite would likely be slower, and join the fight almost as a second wave.