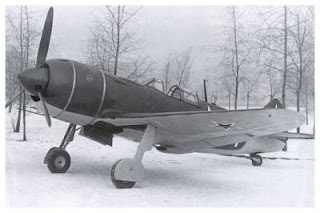 Rall, the German fighter ace from World War Two [WW2], the authoritative source [?], had a "high regard" for the British Spitfire and the Soviet Lavochkin-7!

I am of course familiar with the British Spitfire.

And too I am am of course familiar with the American P-51 Mustang.

But much less so familiar with the Lavochkin-7.

Indeed, hardly familiar at all with any of the Soviet aircraft as flown by the Red Air Force during WW2.

The La-7 was more than a match for German fighter aircraft of the time [Me-109, Fw-190, etc.]? In the proper hands was equal to the Spitfire and Mustang? Does this surprise anyone?

"very likely the best fighter aircraft of the entire war, on either side."

"The aircrafts record was legendary, matching 115 La-7 losses to over 3,100 victories over German enemy aircraft. The excellent performance of the La-7 combined with a veteran pilot made it nearly untouchable but more importantly it kept novices from succumbing to the enemy before they could acquire the necessary combat skills."

"By later 1944 German AF even issued an order to not engage newer Russian fighters below 5000m [about 15,000 feet] unless by completely surprise and numerical advantage."

And served in the years subsequent to the end of the war as a "testbed" for advanced "propulsion systems":

The La-7 seems to be a slightly improved version of the La-5? An improved leading edge to the wing and some components [wooden] replaced by metal alloy manufacture. [slight improvements can sometimes result in big advantages?]

The La-7 was more or less analogous to the Spitfire and the Mustang? And in the Soviet fashion able to operate off of unimproved airfields and also rugged, requiring less maintenance and stood up better under greater stress?

Just a few minor improvements meant a significant edge in a "dogfight". Soviet fliers by 1944 and 1945 had the means available to dominate the skies and even if necessary tussle with and defeat American and British aviators if the need arose?