"The retreat through Siberia became an element of the heroic military cult around the legions, compared to the Anabasis of Greek mercenaries across Persia"

The saga of the Czech Legion.

Persons, ethnic Bohemians [Czechs and Slovaks] so wanting to participate in the combat of the Great War that they nearly circumnavigated the planet to get into the heat of the battle, the main fray, the western front!!

"The Czechoslovak Legions . . . were Czech and Slovak volunteer armed forces fighting together with the Entente powers during World War I."

And doing so when the opportunity for demobilization and a return to civilian status was made available.

Bohemians desirous to gain independence for their people, the creation of a nation-state for the Czech and Slovak people in the aftermath of WW1 being a main goal.

"Their purpose was to help the Entente and win their support to the creation of an independent country of Czechoslovakia, then part of the Austro-Hungarian Empire."

[the Czech and Slovak people at the time of WW1 of course were under the rule of the Hapsburg monarch, citizens and nationals of the Austro-Hungarian Empire.]

A legion of ethnic Czechs and Slovaks, fighting under the auspices of the Russian Czar, taking sides for the Entente powers, against those [Austro-Hungarians] to whom they owed nominal allegiance.

The Czech Legion, a distinct "national" unit within the Russian Army, formed from:

* "prisoners and deserters from the army of Austria-Hungary"

With the Treaty of Brest-Litvosk, the Legion found itself in a precarious position. An army [about 50,000 men] of Czechs and Slovaks, still hoping to contribute to the defeat of the Central Powers, but stranded near the Russian city of Kazan, the route westward blocked by the Red Army of the Bolsheviks!

The Bolsheviks, first favorably disposed toward the Legion, then becoming mortal enemies in accord with the peace treaty signed with the Germans.

The Czech Legion, to-the-death-adversaries of the Bolsheviks, the Legion acquitting itself well in combat with the Reds!! 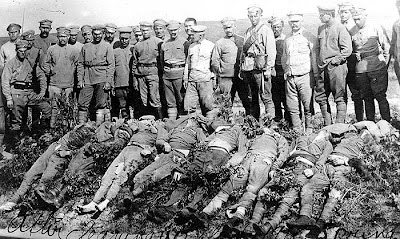 This particular graphic shows a pile of dead bolsheviki those standing of course members of the Czech Legion!!

The Czech Legion, having no recourse but to FIGHT EASTWARD, TOWARD VLADIVOSTOK, 6,000 MILES AWAY!!

A "march" successfully completed, the Legion in constant combat, fighting all the way, following the route of the trans-Siberian railroad.

The Czech Legion, eventually reaching the Western Front, only after arduous journey, Vladivostok/Pacific/United States/Atlantic, arriving just in time for the final combat actions of the Great War.

This too is surprising? "National units" such as the Czech Legion were in actuality a violation of international law as it existed at the time [and maybe does right now?]!!

"Forming volunteer military units from prisoners of war (POW) was a case without precedent in international war law and the Hague Convention. The Hague Convention specified that POWS could not be employed in any task that would cause even indirect harm to their countries or origin."

"But Russia's primary concern was the potential for violating the Hague Convention. The principle espoused by supporters of volunteer units, namely that the volunteers wished to fight not against their own countries but against an oppressor, was not considered adequate."

The nation-state of Czechoslovakia WAS formed in the aftermath of WW1, in no small measure to the devotion and battlefield prowess of the Legion!

Anabasis (from Greek ana = "upward", bainein = "go") is an expedition from a coastline up into the interior of a country. Katabasis, by contrast, is a trip from the interior down to the coast.

"The Hague Convention specified that POWS could not be employed in any task that would cause even indirect harm to their countries or origin."

After releasing them, they were no longer POWs.