This was just recently a major news item! American soldiers FROM THE VIETNAM WAR, RECEIVING THE PRESIDENTIAL UNIT CITATION! The highest collective award that the American nation can award to the deserving!

Almost FORTY YEARS AFTER THE FACT, BUT STILL JUSTLY DESERVED!!

This has been termed: "The Anonymous Battle".

A company-sized unit of the 1st Air Cavalry, American infantrymen in Vietnam, having walking into a bunker complex of a North Vietnamese Army [NVA] battalion, pinned down and in sore need of help.

Aid and assistance coming in the form of the cavalry. The armored cavalry of the 11th Armored Cavalry Regiment [ACR], A Troop [a company sized unit also].

"For the next eight hours, Poindexter and his soldiers would battle the jungle and a determined, dug-in enemy force as they fought their way to their fellow soldiers."

Just as in the western movies, the cavalry arriving just in time, saving the day. Distinguishing themselves in the process, ONLY BEING PROPERLY AWARDED FOR THEIR HEROICS FORTY YEARS LATER!!

* The armored cavalry concept was one of the few American ideas in Vietnam that seemed to work. Against the odds, and the perceptions of the "experts", ARMOR could and was used in Vietnam! Armored cavalry, those self-contained combined-arms units consisting of armored personnel carriers [laden with heavy infantry], tanks, artillery and helicopter-gunships, all worked as a charm in Vietnam, jungle notwithstanding!!

* In this particular instance, perhaps ONLY the armored cavalry could have saved the day. That NVA battalion-sized unit was dug in, with bunkers of earth and wood, relatively impervious to even air strikes. Close-up direct fire from the main guns of tanks, and assault by fresh infantry backed up by the organic firepower of the protected APC's WAS THE ONLY THING THAT WOULD HAVE WORKED IN THIS CIRCUMSTANCE.

* A Troop would have had to "hack" their way through the jungle the hard way, bulldozing with tanks and special bulldozers [Rome plows?] in the lead, a trail being created for the remaining APC's and armor to follow. Where no path existed, the ACR MADE THEIR OWN!!

* A troop of ACR had extraordinary firepower. Each APC had mounted one fifty caliber [.50] machine gun and two thirty caliber [.30] machine guns, each MG protected by a gun-shield. That does include organic main gun tank fire or on call artillery and helicopter-gunship supporting fires. 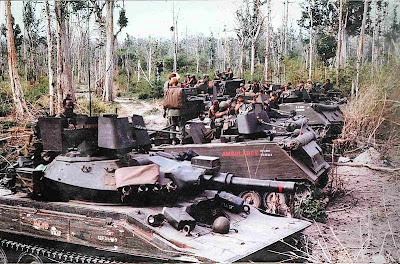 * This was not the only occurrence where an armored cavalry unit saved the day in Vietnam. An Australian unit under assault and in a precarious position at Long Tan also called upon and were rescued by a company sized unit of APC. Same occurring during the relief of the embattled U.S. firebase GOLD! ACR units in Vietnam performed admirably and with distinction, such combined-arms units, however, not even being deployed until 1968 or so - - too late!!