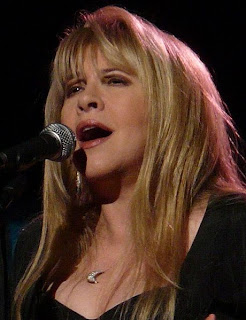 “I call it a soldiers' iPod. It has all the crazy stuff that I listen to, and my collections I've been making since the '70s for going on the road, when I'm sick..."

Here with the charitable work of the rock singer and musician, Stevie Nicks [Stephanie].

Passing out iPods to the wounded soldiers in the military hospital, a personal visit, some small talk, and a token of her esteem - - a music device [iPod] loaded with musical selections, personally selected by Stevie herself.

"In late 2004, Nicks began visiting Army and Navy medical centers in Washington, D.C. While visiting wounded service men and women, Nicks became determined to find an object she could leave with each soldier that would raise their spirits . . . She eventually decided to purchase hundreds of iPod Nanos, load them with music, artists, and play-lists which she would hand select, and autograph them. She now regularly delivers these tokens of her appreciation [to wounded soldiers]"

An ongoing project, for which a lot of praise ought to be given. Done without fanfare, and honest-to-GOD selfless charity, seldom seen.

Very remarkable and to be lauded and praised.

Stevie too is still a very sexy looking older lady!!