"The whole point of the doomsday machine is lost if you keep it a secret!" cries Dr. Strangelove. "Why didn't you tell the world?"

Thanks to Wired News here is a description of the hitherto [?] unknown Soviet/Russian doomsday "machine"!

"Inside the Apocalyptic Soviet Doomsday Machine"

"Russia's doomsday machine . . . an actual doomsday device—a real, functioning version of the ultimate weapon, always presumed to exist only as a fantasy of apocalypse-obsessed science fiction writers and paranoid über-hawks." 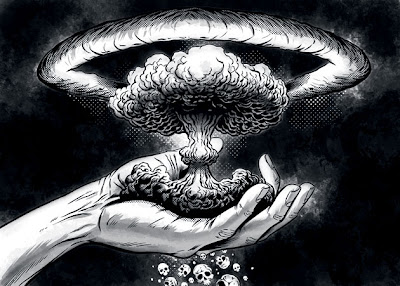 WAS NOT a fantasy!! An autonomously operating, electronic/elctro-mechanical system that had the ability to launch Soviet/Russian missiles without human intervention!!

A "doomsday", "fail-safe" system that would guarantee nuclear retaliation against the United States, regardless of whatever happened to the Soviet/Russian leadership/command and control!!

"guarantee an automatic Soviet response to an American nuclear strike . . . Ground-based sensors would detect that a devastating blow had been struck and a counterattack would be launched."

A system - - that American intelligence and the highest echelons of the American political and military command and control were TOTALLY UNAWARE OF!! Apparently so!! Soviet/Russian paranoia and counter-intelligence being what it was/is, the Russians put this system into place and working order [?] and no one in the "west" knew a thing about it!!??

This system, Perimeter, is still in place? Who knows? Surely in the gentler, kinder world we live in now, with nuclear disarmament actually occurring, slowly but surely, Perimeter is now an unnecessary anachronism?

Read the whole article. Graphics by Ryan Kelly are just superb too!!