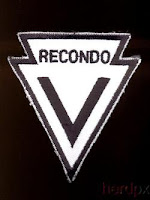 Way before actually!! FORTY YEARS TO BE EXACT!

Only very vaguely was I was aware of Recondo. A small unit combat arms leadership training course before, during and even after the Vietnam War.

It seems this course as taught after Vietnam to a degree branch or MOS immaterial and was OPEN TO WOMEN!

"Several infantry divisions re-instituted Recondo Schools in the post Vietnam era to better train more small unit combat arms leaders. The 9th Infantry Division [Ft. Lewis WA.] ran a Recondo School from 1976 to 1979 which was 15 days long and included 272 hours of intense training . . . The 9th Division Recondo School was unique in that it was open to both men and women assigned to the post. However, there were no female graduates during the course's period of operations and the course averaged about a 50 percent attrition rate with most graduates ending up with a 20 pound weight loss . . . Graduates were awarded an arrowhead shaped badge with the arched letters RECONDO on the top which was worn on the right pocket of the fatigue shirt or left pocket of the dress green uniform."

So even forty years ago there was at least the opportunity for women to participate in a combat arms training program. Recondo admittedly more of a small unit leadership training program and abbreviated but nonetheless also a similar curriculum as found either at Ranger school or the Marine infantry officer course.

See more blog entries the topic of which is women as admitted into the Ranger program of the Marine infantry officer course: