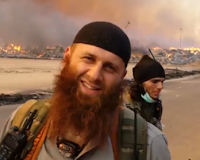 From that same Chicago Sun Times article further on Abu Omar the Chechen. That senior Islamic State commander I often refer to as Red Beard.

This report is specious and need clarification? Only recently was it reported that Abu Omar was in Libya organizing jihadists loyal to and having pledged allegiance to the Islamic State.

Unquestionably Abu Omar is a charismatic leader and his death will be a severe blow to the Islamic State. If indeed the man now does "swim with the fishes".

"The reports of my death have been greatly exaggerated." - - M. Twain. And for Abu Omar also?