The army of terra-cotta warriors as buried with the Chin Emperor now undergoing further forensic investigation. Forensics as might be used in a criminal investigation and as also found in modern counter-insurgency operations.

Those statutes the facial features at least thought to be based on real individual soldiers and not merely generic models. The debate continues.

"Since then, archaeologists have puzzled over how ancient artisans produced the estimated 7,000 lifelike clay soldiers, right down to their stylish goatees and plaits of braided hair. Some have suggested that the statues were modeled after real, individual soldiers; others think they were assembled from standard clay ears, noses, and mouths, similar to the Mr. Potato Head toy." 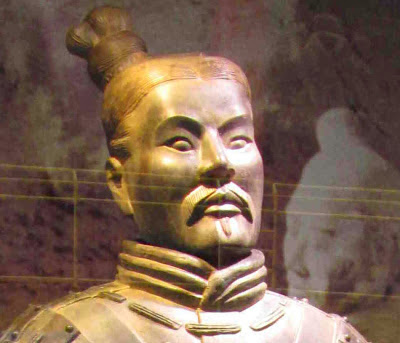 Close up image of the facial features from an actual terra-cotta statue. NOT a replica but the real thing as on exhibit. This particular soldier thought to be a general officer.

"Recently, in a project known as Imperial Logistics: The Making of the Terracotta Army, a team of archaeologists from University College London (UCL) in Britain and from Emperor Qin Shi Huang's Mausoleum Site Museum in Lintong, China, have been using the latest imaging technology and other advanced methods to deduce the design process behind the warriors. The British-Chinese team took detailed measurements of the statues' facial features, focusing especially on the ears. Forensic research shows that ear shapes are so variable among humans that they can be used to identify individuals."

About one hundred faces of the terra-cotta army already having been subject to sophisticated and modern facial analysis software as used by law enforcement at international border crossing checkpoints.

Two thousand years later the saga continues in a manner as the Qin [China] Emperor and his army of bodyguards in eternity could have never imagined.