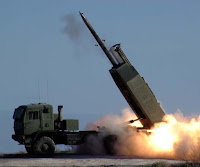 From the Sputnik article thanks to the tip from Jeff a weapons system I was unfamiliar with now in action the target the Islamic State [Daesh] combatant units. NOT the first time however this weapons system has been used agaist ISIL [Daesh]. NOR will it be the last.

"US forces hit Daesh targets near the Turkish border in northern Syria overnight using its newly deployed high-mobility artillery rocket system (HIMARS), the special envoy of the US president for the anti-Daesh coalition said Saturday."

HIMARS! Not at all familiar unto this moment with HIMARS. Rocket artillery of extraordinary capacity. Again, HAS BEEN used before and hardly will this be the last time the weapon fired at an enemy .

Launchers located as reported so far in Iraq, Jordan and now possibly Turkey BUT firing at targets in Syria!!

"In November 2015, the United States Army revealed they had deployed the HIMARS to Iraq, firing at least 400 rockets at the Islamic State since the beginning of summer. HIMARS detachments were sent to Al Asad Airbase and Al-Taqaddum Air Base in Anbar province. On 4 March 2016, Army HIMARS systems fired rockets into Syria in support of Syrian rebels fighting ISIL for the first time, with the launchers based in neighboring Jordan."

THAT RANGE OF HIMARS EXTRAORDINARY. NEARLY TWO-HUNDRED MILES [320 kilometers] and SUPER-DEADLY. Accuracy I am in question about. "Maximum firing range 2–300 kilometres (1.2–186.4 mi)"

HIMARS not having a cluster-munitions warhead an alternative-warhead [AW] of hardly less destructiveness rather used!