Yet more from that Strategy Page article, in this particular instance the CHINA CONNECTION!

Quemoy and Matsu I have heard of. But not the Kinmens! Until now!

"There is only one other tube (as opposed to rocket) 240mm artillery weapon still in use and that is the American M1 240mm howitzer. Taiwan still has four American made 240mm howitzers stationed on the Kinmen islands off the China coast. These four heavy guns are based in bunkers built into mountains and are rolled out to fire."

"Taiwan . . . has kept four M1s (which it calls 'Black Dragon) operational ever since. The M1 requires a crew of 14, has a maximum range of 23 kilometers and fires up to thirty 163 kg (360 pound) high-explosive shells an hour. The Black Dragons have always been stationed on the Kinmens, a chain of small islands (some only two kilometers from the coast). These islands were last heavily fought over (with artillery) in 1958." 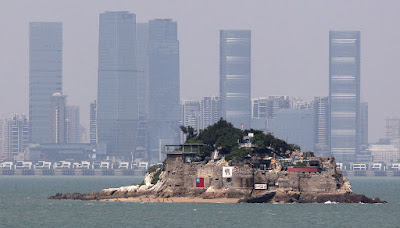 Mainland China in the background. One of the Kinmen Islands in the foreground.

The Kinmen Islands part of parcel of what was called the Second Taiwan Straits Crisis. From almost sixty years ago now. During that period there was a fear that World War Three [WW3] might actually be initiated by conflict over these itty-bitty islands.

Conflict as feared never did transpire, but the anxiety was that it might have!