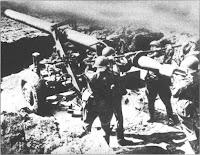 Surely such weapons no longer have a versatility or do they? That 240 mm big-bore breach-loaded mortar of the Soviet era still being used in combat. The Syrian despot Assad finding such weapons to his liking.

Thanks to yet one more article from Strategy Page:

"September 10, 2016: Another Cold War era weapon is showing it is still useful. The Syrian Army is using Russian made 240mm towed mortars, a design first seen during World War II as the M240. This is a four ton towed mortar that . . . Syria and several other East European nations obtained M240s during the Cold War. Some of those Cold War era exports are and still used. Syria used the M240 unsuccessfully against Israeli fortifications during the 1973 war and again in 1989 against anti-Syrian factions in the Lebanese Civil War. In 2011 Syria again brought out its M240s and 2S4s for the civil war but use has been limited, until 2016, by ammunition shortages."

"This Russian 240mm mortar remains useful despite short range (about 9,700 meters) because it is accurate and effective at that range, especially if firing at fortifications or in urban areas . . . what has kept the 240mm mortar in use is the anti-fortification shell can go through several meters of earth and concrete to destroy an underground bunker or troops firing from the basement of a multi-story building."

AT LEAST TO MY KNOWLEDGE THE LAST TIME SUCH WEAPONRY WAS USED IN THE URBAN SETTING WAS DURING THE BATTLE OF WARSAW? 1944. ENTIRE CITY BLOCKS DEMOLISHED WITH A SINGLE ROUND AS FIRED BY THE GERMAN SIEGE MORTAR "ZIU".

Those breach-loaded mortars of the Soviet era smooth-bore cast iron and firing a cast iron mortar bomb [Americans call the projectile as fired by a mortar a "round", the rest of the world calls it a "bomb". You can more mortars and "bombs" quicker and cheaper, proliferate the battlefield with same of both.

"Quantity has a quality of it's own!!"