Lots of stuff goes together in this particular blog entry.

Thanks to War is Boring and the tip from Freeper:

That Indonesian province of Banda Aceh [very northern tip of the island of Sumatra] most restive and the connection to the Islamic State most apparent. 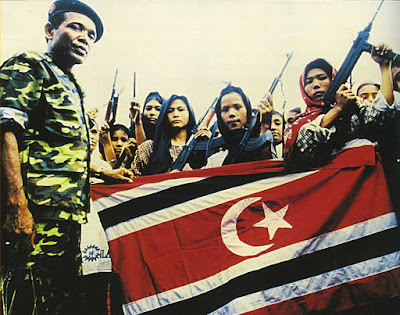 The eternal Islamic Malay insurgent of GAM. These guys remind me so much of those Moro rebels of the Philippines. BIFF and such. Always at war with "city hall" generation upon generation everlasting.

"The quiet outskirts of Banda Aceh, the capital of a province once known as Indonesia’s bloodiest, hid a history of violent revolution and counterrevolution"

"Aceh, the westernmost region of Sumatra, has a long history of insurgency. Before the Netherlands subsumed the Acehnese into the Dutch East Indies, they considered themselves allies of the Ottoman Empire and defenders of its caliphate."

"Acehnese insurgents fought the Dutch in the Aceh War 1873-1904, the Japanese in 1942–1945 and the Dutch again in 1945-1949. In the following decades, some Acehnese thought that these victories warranted independence from Indonesia, which they considered an artificial nation."

"Hasan di Tiro founded the Free Aceh Movement, or GAM, in 1976 along separatist and secularist lines. GAM fighters trained in Libya and attacked Indonesian soldiers, who, in turn, killed thousands of militants and sympathizers, including civilians. Around 20,000 people died in the war."

FIGHTERS FROM BANDA ACEH NOW PRESENT AND COUNTED AMONG THE COMBATANTS OF THE ISLAMIC STATE! THE HISTORICAL CONNECTION WITH THAT PART OF THE WORLD MOST SURPRISING!

During that thirty year period of the Aceh War the Dutchman Snouck most instrumental in formulating policy to fight the Islamic insurgents of Banda Aceh. Persons such as Snouck no longer exist?