From MARCO POLO through Harry some items of interest, the radioactive elements of those many Soviet era nuclear submarines a tremendous environmental problem for which the Russian has no means of proper disposal. Efforts to alleviate the difficulty currently underway with mixed results.

1. ". . . the Italian shipyard 'Muggiano' is building a special-purpose barge for the Russian Navy, whose sole purpose is to transport radioactive parts and sections of broken-up nuclear submarines. It is called 'Itarus' . . . it will be completed in coming April, and will be towed to Murmansk. The barge looks like a floating dock. Its over-all length is 85 meters. Its width is 31.2 meters. On both the sides of the flat deck, there are barriers 29 meters high, made of thick steel plates. It is not powered." 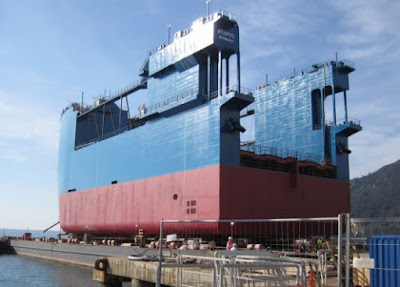 2. "There is a place called 'Sayda Guba' on Kola Peninsula in arctic Russia, where a four-kilometer-long tunnel was dug, which is the storage for radioactive sections from dismantled nuclear submarines. They are likely to be stored there for the next four hundred years or so. Reportedly, at this time, at a Severodvinsk dockyard, six Soviet-era submarines are being dismantled."

How Russian engineering made the current operation in Syria possible

3 million gas masks of the latest type also provided to Assad prior to massive Russian involvement in Syria. That population of Alawite in Syria about 10 % of the society.