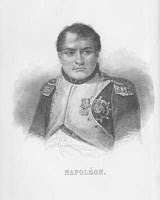 As extracted from the Victor Hanson Davis Internet web site.

Napoleon the military man, a conqueror and dictatorial maniacal ruler, but also a man "iconic" and worthy of great respect, even from the French intellectual class.

"Is Trump Our Napoleon?"

"For a decade and a half Napoleon wrecked Europe. He hijacked the platitudes of the French Revolution to mask his own dictatorship at home and imperialism abroad. Yet today, two centuries after his defeat at the Battle of Waterloo, he remains an icon for many in, and a few outside, France. Why? How could geniuses like the novelists Victor Hugo and Stendhal acknowledge Napoleon’s pathologies and the damage that he did to the early 19th century European world, and yet enthuse that he made the French feel both politically and morally 'great'? Most French even today believe that he did."

"Moreover, Napoleon’s own political agenda was a mishmash of conservative authoritarianism and populist social justice. So effective was the strange brew that even to this day scholars fight over whether Napoleon was a proto-Hitler whose unhinged ambitions led to millions of innocent European, Russian, Caribbean and North Africa dead, or a loyal defender of the French Revolution, whose eleventh-hour iron hand alone kept alive the threatened ideals of fraternity and egalitarianism."

Merely taking into consideration alone the military career of Napoleon according to Trevor Dupuy:

"it is impossible to overemphasize the gigantic impact of Napoleon on  warfare, the art of war, and military theory . . . Napoleon was presented by circumstance with open-ended opportunities for the employment of mi8litary force. he had the intellect, ability, will, and - - above all - - genius, to seize opportunities . . . In the process he transformed war as has no other man before or since."

Also from Trevor Dupuy regarding the generalship of Napoleon:

"Napoleon Bonaparte commanded in more battles than any other general in history. By one count he exercised command in fifty-five major of significant battles, to say nothing of perhaps another hundred engagements or skirmishes or sieges."

"Greatness - - Something or someone that is larger in size, quality, or quantity may be called 'great.'"