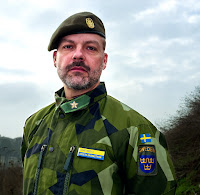 From the Breitbart article thanks to the tip from Freeper:

"Citing the situation in Sweden, the recent decisions of domestic politicians, and global instability, the chief of the Swedish army General Anders Brännström told men under his command they could expect to be fighting a war in Europe against skilled opponents 'within a few years'".

"It is unusual for a serving senior military figure, much less the professional head of an Army to speak out on such political matters in Europe. Yet these comments are not just the General’s opinion, he added, remarking his senior colleagues all held the same thoughts. He said: 'this is a serious position shared by most. This is a completely different situation to the one we had ten years ago.'"

THINK ALSO THE RECENT PRONOUNCEMENTS OF THE SWISS ARMY CHIEF OF STAFF.

"The supreme function of statesmanship is to provide against preventable evils." - - E. Powell. Forewarned and forearmed and all that.