From a variety of sources that amount of war-booty as captured intact by the Islamic State over one and one-half years ago now immense.

Consisting in large measure of a monumental number of Humvee!

1. "ISIS Takes Dozens of Captured US Humvees, Tanks to Syria from Iraq"

NO, NOT DOZENS, OVER TWENTY-THREE HUNDRED!!

"The Pentagon is alarmed by reports that the Islamic State of Iraq and Syria (ISIS) has captured dozens of US Humvees, tanks and weapons, which the militants are now sending to Syria." 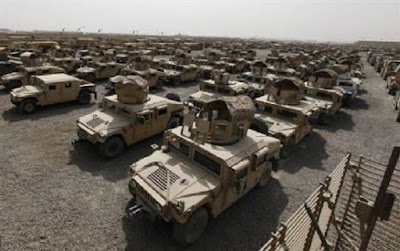 Many of those captured Humvee armored and having a turret with gun shield and mount for a heavy machine gun. A super-technical.

2. "Equipped with Humvees, ISIL Clashes with Rivals in Syria" 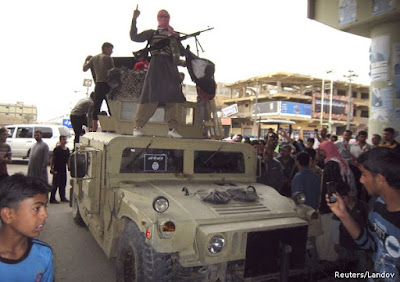 "BEIRUT — The Islamic State in Iraq and the Levant (ISIL) battled with rival opposition fighters in northern Syria on Sunday, using U.S.-made military vehicles captured from neighboring Iraq for the first time, a monitoring group said." 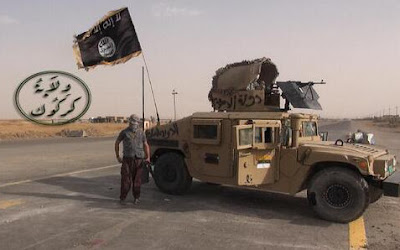 "Iraq has admitted that ISIS jihadists captured huge caches of US-made weapons, including thousands of Humvees seized from Iraqi forces retreating from Mosul last year. The spoils of war have since then been used by ISIS to gain ground in Iraq and Syria." 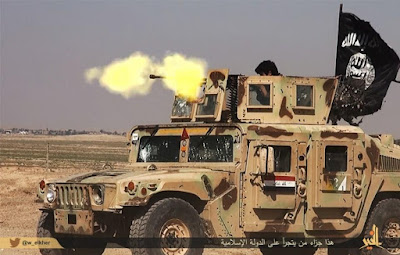 This Humvee appears to be armored and has sustained hits to the windshield relatively unscathed. That is an ISIL adherent firing some sort of heavy machine gun those prominent horizontal muzzle flashes indicative of a Dushka MG. ISIL flag flying prominently.

For shame! Those Pirates Bedu now on the offensive [?] and making very good use of the many armored Humvee as captured, with or without the turret, gun shield and mount for a heavy machine gun. A light form of armored personnel carrier and infantry fighting vehicle. All courtesy indirectly of Uncle Sam.