Also from the latest edition of the DEBKAfile newsletter some disconcerting info regarding the fight against the Islamic State.

Contrary to what is presented in the main stream media, ISIL continues to advance?

"At least 48 people were killed and 200 people were wounded in ISIS suicide bombings and shootings Monday in Baghdad and the other areas – the highest number of casualties from ISIS attacks in three months." 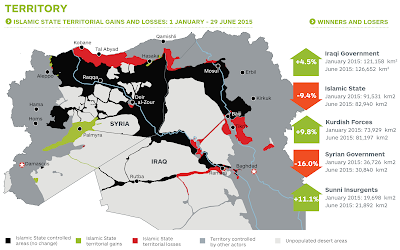 This images purports to show territorial gains [green], losses [red] and consolidation [black] of the Islamic State during the year 2015. Click on image to see a larger view.

"The Islamic State is still strongly on the offensive, although Western military sources are trying to present the Iraqi army as gaining the upper hand in the fighting, including exaggerated reports of Iraqi attacks on ISIS positions around Mosul. In fact, ever since Iraqi forces captured the center of the ruined city of Ramadi, ISIS fighters are fighting a guerrilla war from the eastern outskirts. The jihadists are also pushing forward in three additional sectors: Haditha in the western Anbar province; the Shiite Baghdad al-Jadidah, a Shiite area in south Baghdad; and Muqdadiyah in the eastern province of Diyala. They are forcing the Iraqi army to divert strength from other sectors to defend the capital."

THIS SOUNDS TO ME AS THE WORK OF PIRATES BEDU! ELITE, FAST-MOVING AND HIGHLY MOBILE AND VERY WELL ARMED ISIL COMBATANTS FIGHTING IN THE ANCIENT AND VENERABLE MANNER OF THE BEDOUIN!