Before there was Platform-M there was the Polish TKS.

And many others also besides the TKS.

Baby tanks, armored referred to as tankettes. In that period between the two world wars tankette design and development quite common.

Tracked vehicles with limited armor and limited firepower both.

Usefulness only to the infantry in a supporting role, better than nothing! 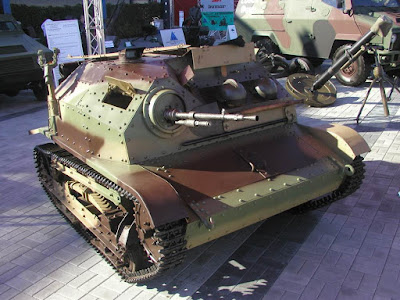 NOT a robot vehicle. A tankette. That machine gun a 7.92 mm caliber only. Armor able to deflect small-arms fire only.

That antidote to the tankette and even the current Platform-M a sniper rifle such as the Soviet era SVD firing an armor-piercing-incendiary round [API]. Dedicated marksman crawling around on the battlefield embedded with the infantry able to take out a tankette with a single round at extended ranges [up to 800 meters] for the SVD!!