From the latest issue of the DEBKAfile newsletter the issue is at hand, the game is afoot, the robots move.

"Russian, Syrian, Iranian and Hizballah troops were taking up positions Monday, Jan. 18, for a massive offensive to retake Aleppo, Syria's second city, hoping to break the backs of rebel resistance."

"A victory in Aleppo (prewar population: 1 million) is expected in Moscow, Tehran and Damascus to reverse the tide of the war and force the Syrian rebels to accept that their insurgency is at an end and their only remaining option is to join the peace process initiated by Russia on Syria's future. Two novel Russian robot systems will take part in the operation - the Platform-M combat robot and the Argo Mobility Platform." 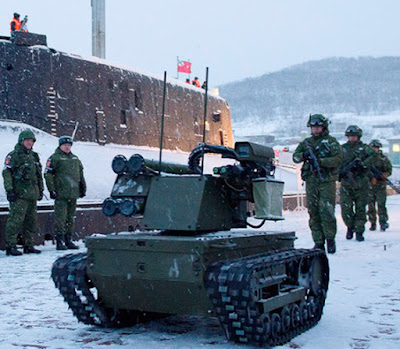 This is the Russian Platform-M. Tracked robot vehicle equipped with what appears to be four anti-tank guided-missiles [ATGM] and a heavy machine gun. Probably incorporates low-light and forward-looking infra-red vision of some sort at a minimum.