From the latest issue of WW II magazine and especially thanks to Larry Decuers, curator at The National World War II Museum some clarification as to the life saving device as seen in this iconic image 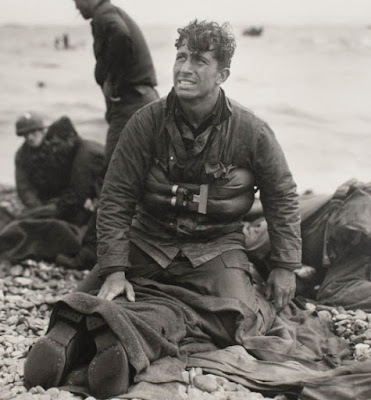 American soldier on Omaha [?] beach, Normandy, 6 June 1944. Life belt as worn, some troops having to jump into five to six feet [2 meters] of water prior to wading ashore.

"a world War II-era U.S. Navy 1926 inflatable flotation belt . . . It could be used as a life preserver by activating two CO2 cartridges in the belt or blowing into a smaller pair of rubber inflation tubes . . . the belt is most famously know for being issued to U.S. Army D-Day invasion troops . . . the designers intended it be right under the armpits when inflated - - otherwise a wearer would tip in water, submerging his head and chest. Tragically, this is exactly what happened to many men on D-Day who drowned when they inflated life belts being worn too low."

A LIFE SAVING DEVICE [M1926] BUT CAN KILL YOU IF WORN IMPROPERLY. SEE MY PREVIOUS BLOG ENTRY, THE LIFE VESTS AS ISSUED AND WORN BY THE ARMY PERSONNEL ABOARD THE LEOPOLDVILLE!

A LITTLE BIT OF TRAINING AND INSTRUCTION CAN GO A LONG WAY!!