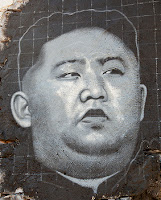 Kim and the North Koreans now have thermonuclear weaponry?

So it is alleged this morning.

As reported, this "ups the ante significantly"??

All previous calculations must now be set aside. The UN Security Council is going to hold an emergency meeting?

"(CNN) Sticking it to its foes, North Korea on Wednesday celebrated what it called a successful hydrogen bomb test -- a milestone that, if true, marks a colossal advancement for the reclusive regime and a big test for leaders worldwide to determine what to do about it."

"Pyongyang has been very vocal about its nuclear ambitions, pressing on despite widespread condemnation, sanctions and other punishments. Having a hydrogen bomb -- a device far more powerful than the plutonium weapons that North Korea has used in three earlier underground nuclear tests -- ups the ante significantly."

The image accompanying this blog entry is doctored [?] by Photoshop, the porcine visage of Kim of Pyongyang unmistakable nonetheless.

Previously it was thought the North Korean did possess primitive nuclear munitions but of doubtful reliability. Primitive in the sense of being experimental gadgets not deliver-able atomic warheads! All bets are off if indeed now has fusion weapons?