Place this one in the strange but true category. The episode much more clarified in my mind now.

From many years ago now [year 2000?] that phenomenon of the crop circles and the military connection.

Crop circles the phenomenon found in the vicinity [very close] of what described in the newspapers as an "important" English governmental facility [but not military] and having appeared without warning, unexpectedly JUST THERE!

My initial thought was that the "important" governmental facility was the radio telescope at Jodrell Bank but this apparently is not so. Rather think Chilbolton Observatory. That installation the vicinity of Chilbolton a large "meteorological radar experimental facility".

That "phenomenon" of crop circles controversial and having been so for a very long time. Often thought to be either the work of space aliens OR merely human pranksters of amazing ability. The issue unresolved.

So great was the concern at the time [2000?] and as was reported the British dispatched secret military units to conduct surreptitious surveillance of the area. Units [I think this was detachments of the SAS] whose mission was to secretly observe and report future similar crop circle events. WHO exactly was creating these crop circles and HOW was this being done. Establishing and maintaining a hide-spot for surreptitious surveillance a specialty of the SAS [Special Air Services]. 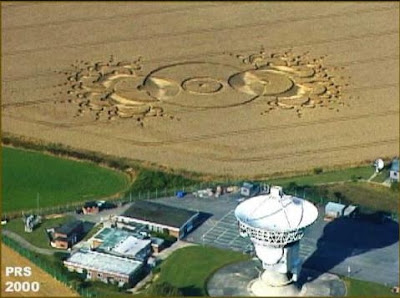 Here with an image of the crop circles vicinity Chilbolton much to the amazement of everyone. 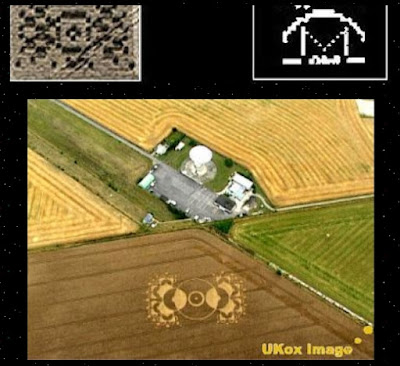 This image showing an overhead view of the crop circles and Chilbolton. The observatory as is obvious to even the most casual of observers very isolated, surrounded by farm fields in all directions. NO ONE supposedly saw a thing. How did those crop circles get there and who put them there?

That undetected trespass in the near vicinity of the Chilboton within the context of: "new capability to detect orbiting satellites and space debris" suggests that the deployment of military special operations type units in response was not only WARRANTED BUT MANDATED! TRESPASS OF THIS NATURE NOT MERELY A POLICE MATTER!

The jury still out on the entire topic of crop circles? Space aliens, human pranksters, a natural event, the WHO and HOW of the occurrences remains unclear and undetermined? Many theories having been proposed, but nothing ever confirmed or denied.