Haim, maim but do not kill, break out the Ruger!

"I would station snipers at the hot spots . . . and shoot at [people who] throw rocks and Molotov cocktails. The snipers would have to operate selectively and methodically. They don't have to kill. They can maim."

"The IDF is currently authorized to use the low-powered .22 Ruger, aimed at the lower body, in Judea and Samaria to contain violence"

Comments of the Israeli public in response to an upsurge of riotous behavior vis-a-vis the Temple Mount, Al Aqsa Mosque, the Old City of Jerusalem. Use of the Ruger .22 caliber sporting rifle in a military version suggested as a remedy to the chaos and disruption. .22 caliber =  5.6 mm.

That use of the Ruger .22 caliber rifle the topic of previous isegoria.net Internet web site articles:

"Terminating Interest in Leading a Riot"

"Col. Jeff Cooper suggested a system that 'would make sure, first, that a riot would stop; and second, that only the leaders would feel the weight of social disapproval.' Of course, since this is Col. Jeff Cooper we’re talking about, his recommended system was a weapon system, a suppressed .22" 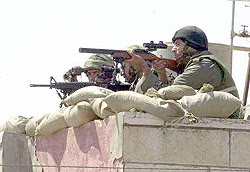 "This weapon, properly sighted and equipped with a noise suppressor, may be used with surgical delicacy to neutralize mob leaders without risk to other members of the group, without noise and with scant danger of death to the subject."

"The Ruger 10/22 is a popular .22 rifle. Apparently the Israeli Ruger 10/22 Suppressed Sniper Rifle was customized for anti-riot use during the 1987 Palestinian intifada "

"[T]he Israeli security forces needed a weapon with a more potent firepower then the standard riot control metal covered rubber round, but at the same time less lethal then the standard issue 5.56 mm round of the M16/Galil assault rifles. So the Israeli Defense Force (IDF) searched for a 0.22 caliber accurate rifle that will be used to take out the key protest leaders by shooting them in the legs." 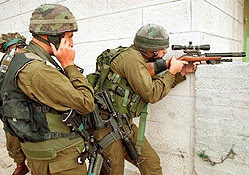 "The Ruger 10/22, fitted with a X4 day optic, a full length suppressor and a Harris bipod was selected for this role and was due to be issued to all infantry oriented units, including both special and conventional forces."

That Israeli using the Ruger .22 since 1987 so understand this use of the weapon and the tactic of riot suppression not new. NORMALLY any use of firearms being a use of lethal force. Snipers using the Ruger instructed to fire for the lower portions of the body only and aim at "mob leaders".