To an extent this reminds me of the parasitic fighter warplane F-85 from the earliest period of the Cold War.

"DARPA's Next Generation Drone Will Launch and Land on Moving Airplanes"

"The Pentagon's research and development agency wants to design a fleet of drones that could self-launch from a larger plane before swarming enemy aircraft and returning to their mother ship after a mission." 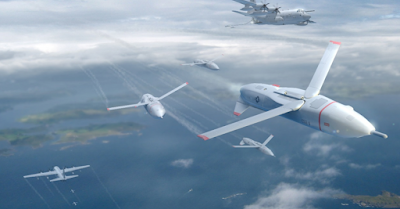 Drones as deployed by what appears to be an AC-130 gunship. Expendable drones however can be recovered. This image shamelessly stolen from Sputnik News and edited.

"These 'gremlins,' as the researchers at the Defense Advanced Research Projects Agency (DARPA) have dubbed them, would be cheaper than standard drones and have a lifespan of about 20 flights."

The concept of the parasitic warplane NOT NEW. At least one hundred year old!

A swarm of such drones releasing a swarm of EVEN SMALLER DRONES EACH HAVING A KILLING POTENTIAL AN UNSTOPPABLE WEAPON?

Conventional warplanes acting as merely stand-off weapons the delivery of drones to the target the main mission, no more manned intrusion of enemy airspace.