The German at Normandy during the Second World War [WW2] employing beach obstacles in depth. Obstacles among which teller mines were liberally and lavishly strewn.

Beach obstacles at Normandy. Obstacles submerged at high tide but above the water line during low tide. Click on image to see an enlarged view. 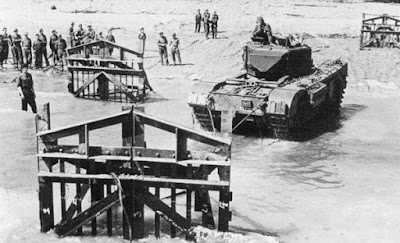 A C Element. Also called a Belgian Gate. An anti-tank obstacle formidable, very sturdy and robust. Those men and the tank give you some sense of the scale. It would take fourteen one kilogram [two and one half pounds] demolition charges to destroy a Belgian Gate. The idea was to collapse the obstacle in a compact mass rather than spread the metal fragments all over the place. 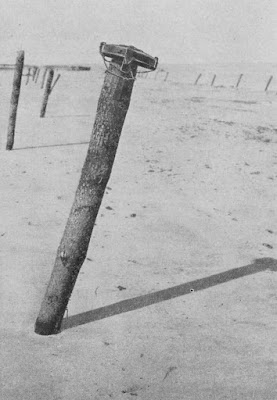 Vertical pole with a teller mine. Facing toward the ocean. 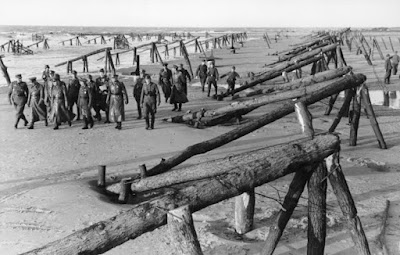 Poles in the form of a ramp obstacle. Facing toward the shore and not toward the water. Sometimes the ramp obstacles would have teller mines attached. That contingent of German officers might be led by Rommel himself! 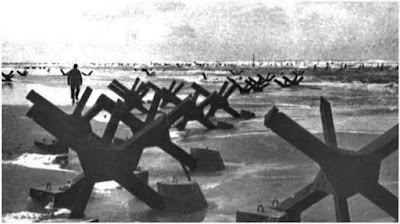 Tetrahedron. Steel posts joined and a considerable obstacle for an armored vehicle or a landing craft. As you can see tetrahedron on this beach strewn in profusion.

Specially constituted combined units of army and navy personnel called Gap Assault Teams their mission to clear the beaches of Normandy of obstacles. Units their existence and mission totally unique within the history of the U.S. military? Platoon sized elements [three squads of army combat engineers and one squad of navy underwater demolition experts] trained and equipped for such a mission. IT IS FROM THE NAVAL PERSONNEL OF UNDERWATER DEMOLITIONS THAT THE NAVY SEAL'S AS WE KNOW THEM TODAY HAD THEIR GENESIS.