I was indeed surprised to read this.

Here with a grave American violation of an internationally agreed upon treaty?

Use of Antarctica for military purposes forbidden by covenant the United States a signatory to?

TRANSIT satellites as used for military purposes their orbits eccentricity resolved on a continual basis by ground stations ONE OF WHICH WAS STATION 019!

"A typical ground station occupied a small Quonset hut. The accuracy of the ground station measurements was a function of the ground station master clock accuracy. Initially a quartz oscillator in a temperature controlled oven was used as the master clock. The master clock was checked daily for drift using a VLF receiver tuned to a US Navy low frequency VLF station. The VLF signal had the property that the phase of the VLF signal did not change from day to day at noon along the path between the transmitter and the receiver and thus could be used to measure oscillator drift. Later rubidium beam and cesium beam clocks were used. Ground stations had number names; for example, Station 019 was McMurdo Station, Antarctica. For many years during the 1970s this station was staffed by a graduate student and an undergraduate student, typically in electrical engineering, from the University of Texas at Austin" 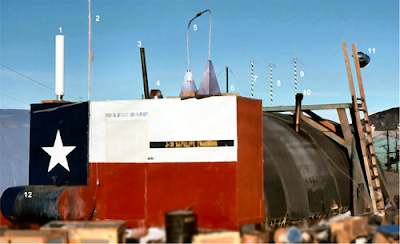 Naval personnel allowed within the confines of what is defined as that area subject to the Antarctica convention ONLY if they are afloat! NOT SO in this case.