Until a few days ago the very existence of this weapon unknown to me!

"The FG 42 (German: Fallschirmjägergewehr 42, 'paratrooper rifle 42') is a selective-fire battle rifle produced in Nazi Germany during World War II. The weapon was developed specifically for the use of the Fallschirmjäger airborne infantry in 1942 and was used in very limited numbers until the end of the war." 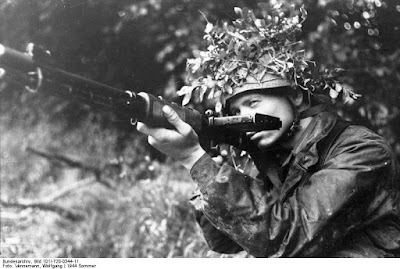 "It combined the characteristics and firepower of a light machine gun in a lightweight form no larger than the standard-issue Kar 98k bolt-action rifle . . . the FG 42 influenced post-war small arms development, and most of its design was copied by the US Army when they developed the M60 machine gun."

ALMOST an assault rifle as that term normally, commonly and generally understood: Those attributes of the assault rifle included in the design of the FG 42 to include:

Another view of the FG 42. Elements of the FG 42 and the German MG 42 incorporated into the design of the post-war American machine gun M60!

German paratroopers of the Third Fallschirmjäger during those battles in the bocage in the aftermath of the D-Day landings [6 June 1944] had this weapon available to them? As rated at that exact instant of time the German paratrooper BEST light infantry in the world superior personnel wielding superior weaponry of which the FG 42 was just one example.

NO wonder that American 29th Infantry Division in Normandy had such a hard time!

It also had the ZF4 scope attachment to it. A truly advenced weapon for its time.