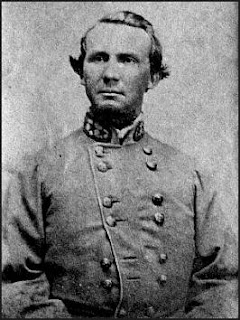 Here is another one of those Confederate general officers killed during the Battle of Franklin, 1864.

STATES RIGHTS! This is correct. His first name is States Rights. Sure stands out in the crowd, does it not!!

"States Rights Gist (September 3, 1831 — November 30, 1864) was a lawyer, a militia general in South Carolina, and a Confederate Army general who served during the American Civil War. A relative of several prominent South Carolinians, Gist rose to fame later during the war but was killed during the Franklin-Nashville Campaign in November 1864."

A man of the most impeccable credentials, family, education, bearing, honor, devotion to his cause. EVEN UNTO DEATH IN WHAT WAS OBVIOUSLY A LOSING SITUATION!!

A MAN WILLING AND ABLE TO PUT HIS BODY WHERE HIS MOUTH WAS!!

"His elite South Carolina family counted among its members a governor, William Henry Gist, state and U.S. senators, and members of South Carolina’s legislature. A well-educated man, States Rights attended a prestigious South Carolina College in Columbia, studied law with a lawyer in South Carolina for a time, then went to Harvard Law School"

States Rights is the archetype of the patrician, wealthy, land-owning planter, of aristocratic mien that Robert E. Lee felt were the proper sort to govern. Landed elites of wealth that would do service for the political domain, heedless of pedestrian concerns.

Look closely at that photograph of States Rights. A man who has the appearance of a modern man. Regardless of what you think of the "Lost Cause", this man can be admired.