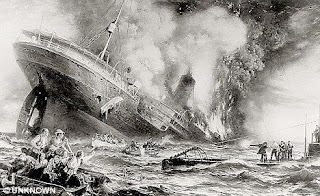 Here from the online edition of the British tabloid "DailyMail"!

Almost one hundred years after the fact, the secret, the real story behind the sinking of the Lusitania has been revealed?

The Lusitania was carrying war munitions and was a legitimate target of war. Sank with justification by a German U-boat. NOT an atrocity as alleged, but a legal and lawful act of war.

Allegations that the Lusitania was carrying munitions have been made ever since the sinking of the ship in 1916. This find, however, seems to answer the question once and for all?

"Secret of the Lusitania: Arms find challenges Allied claims it was solely a passenger ship"

"But now divers have revealed a dark secret about the cargo carried by the Lusitania on its final journey in May 1915."

"Munitions they found in the hold suggest that the Germans had been right all along in claiming the ship was carrying war materials and was a legitimate military target."

"The diving team estimates that around four million rounds of U.S.-manufactured Remington .303 bullets lie in the Lusitania's hold at a depth of 300ft."

"The discovery may help explain why the 787ft Lusitania sank within 18 minutes of a single German torpedo slamming into its hull."

"Some of the 764 survivors reported a second explosion which might have been munitions going off."

* Supposedly, in the White House, is a safe, the instructions to the combination saying: "to be opened ONLY by the President of the United States"! This sounds so very dramatic, doesn't it! That safe purportedly contains documents that reveal the TRUE AND REAL past. Events as they actually unfolded and NOT the varnished history book type of stuff. Among those items to be found within the White house safe is THE ORIGINAL AND TRUE SHIPPING MANIFEST OF THE LUSITANIA!! ONLY the President knows for sure.

* I would also ask the question - - DID THE GERMAN COMMANDER OF THAT U-BOAT FIRING THE TORPEDO KNOW WITH CERTAINTY THAT THE LUSITANIA WAS CARRYING THE WAR MUNITIONS AND WAS A LEGITIMATE TARGET OF WAR? AND IF HE DID KNOW, HOW DID HE KNOW?

* I am skeptical that the .303 SMLE ammunition would have caused secondary explosions that hastened the demise of the Lusitania. Perhaps I am wrong about this, but normally rifle cartridges, even in a mass, would NOT explode with the same force as a conventional high power explosive [TNT, gun cotton, black power, RDX, etc.]!

* If some of that ammo is recovered, it might be possible to trace the munitions to the origin, a factory somewhere in the U.S., I presume? Meticulous records are kept of such "stuff"! This might be worth a go for researchers.

Just another stupid war we made sure we got into.

When I was in middle school, they taught me that the Lusitania was a passenger ship sunk by a German U-boat. I hope they edit these textbooks to rightly show that the United States was feigning neutrality all along.