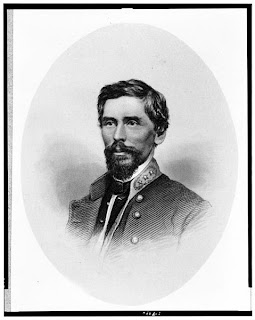 "Oh my feet are torn and bloody, and my heart is full of woe,
I'm going back to Georgia, to find my Uncle Joe,
You may talk about your Beauregard, sing of General Lee,
But the gallant Hood of Texas, played hell in Tennessee."

Alternative lyrics to the song "The Yellow Rose of Texas" sung in the aftermath of the Battle of Franklin.

The only engagement of the American Civil War where a Confederate army left the battlefield in a state of rout and disarray!

A battle [Franklin] during which fifteen Confederate general officers became casualties. Six killed, eight wounded, one captured! For SO MANY flag officers to be casualties in ONE BATTLE is totally unheard of?!

It is said that the two opposing forces at Franklin went at one another with what can only be described as GUSTO!! Flags flying, bands playing, night combat, [at a time when such an occurrence was uncommon!] and hand-to-hand-combat of the most intense nature!

From the Shelby Foote wiki entry:

"Foote labored to maintain his objectivity in the narrative despite his Southern upbringing. He gained immense respect for such disparate figures [to include] . . . Patrick Cleburne"

An immigrant to the United States, having only limited prior military experience in the British Army; but a man having obvious leadership skills and combat ability! Another amateur able to best the professionals at the art of war?

ONE OF THOSE FIFTEEN CONFEDERATE FLAG OFFICERS WHO BECAME A CASUALTY AT FRANKLIN!!

A man killed while bravely leading his troops forward. Knowing full well the odds but doing his duty in a courageous fashion nonetheless!

"Patrick Ronayne Cleburne (March 16 or March 17, 1828[1] – November 30, 1864) was an Anglo-Irish soldier, serving in the British Army and as a major general in the Confederate States Army during the American Civil War, killed at the Battle of Franklin."

"he enlisted in the 41st Regiment of Foot of the British Army, subsequently rising to the rank of corporal."

"Cleburne joined the local militia company (the Yell Rifles) as a private soldier . . . He was promoted to brigadier general on March 4, 1862."

"Cleburne was killed during an ill-conceived assault . . . at the Battle of Franklin . . . He was last seen advancing on foot toward the Union line with his sword raised, after his horse was shot out from under him."

A man also quite willing to go against the popular sentiments of the time when he saw fit. Especially with regard to emancipating slaves who were willing to take up arms and fight for the Confederate cause!!

"In 1864, he dramatically called together the leadership of the Army of Tennessee and put forth the proposal to emancipate slaves and enlist them in the Confederate Army to secure Southern independence. This proposal was met with polite silence at the meeting, and while word of it leaked out, it went unremarked, much less officially recognized"

Emancipate the slaves, allow them to join the Confederate Army, serve their erswhile masters in a combat capacity or otherwise.

An idea - - meet with "polite silence", going "unremarked", NOT "officially recognized"! An idea, worthy of consideration, but totally anathema to the southern aristocratic planters and their ideal of the a noble leisure class whose standing was based upon the OWNERSHIP OF LAND AND THE WEALTH CREATED THEREOF!! Ownership and wealth coupled with continued existence of the "peculiar institution"!