From the Chicago Tribune today:

“Gulf of Aden mission would be part PR, part protection”

“HONG KONG - - In what would be the first active deployment of its warships beyond the Pacific, China appears ready to send naval vessels to help in the fight against hijackers in the pirate-infested Gulf of Aden.”

“Beijing is close mounting a naval mission in the Gulf”

AND, FOR THE CHINESE, IF ACTUALLY ENGAGING IN COMBAT AGAINST THE PIRATES, IT WILL BE THE FIRST TIME IN OVER FIVE HUNDRED YEARS THE CHINESE MILITARY HAS USED FORCE SO FAR FROM HOME!!

Emphasis here upon, “so far from home”!

The Chinese have used military force over the millennia far from their traditional boundaries.

Chinese military expansion occurred during both the Chin and Tang dynasties. Chinese troops made it as far west as Lake Balkash and modern Afghanistan. Far-flung foreign military expeditions are a rarity in the Chinese experience, however?

I am thinking and talking here about a historical experience of 2,000 years!!

Chinese military forces in the 20th Century did fight in Korea, Burma, Tibet, Aksai Chin! Areas either contiguous to or very near to traditional boundaries and borders of Imperial China as it existed in the past!

The last time Chinese troops were used in a capacity FAR FROM HOME WAS DURING ONE OF THE VOYAGES OF ADMIRAL ZHENG HE!! Chinese marines going ashore and doing battle with Tamil warriors on the island of Sri Lanka [Ceylon]!

Joining the International Maritime Force [IMF] and helping to combat piracy in the Indian Ocean will also be seen as one more baby step toward implementing the “String of Pearls” policy of the Chinese? 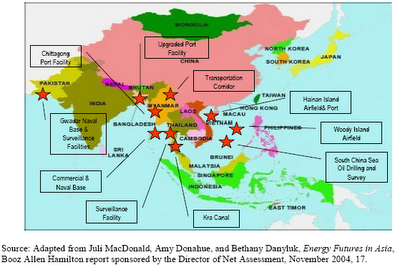 China is looking forward about twenty years or so when it believes it will be the dominant world power, surpassing the U.S.?

Especially with significant interests in the Indian Ocean area, East Africa, etc. The Chinese - - RIGHT NOW, have established a presence in the East African region and further inland!!