Here, thanks to the New Duranty Times:

"CAMP SZUTS, French Guiana — There was no other way to put it: Stiven Baird, an American in the French Foreign Legion, looked terrible."

"A week into the legion’s jungle warfare course here in the equatorial rain forest, he was famished after eating nothing for three days but some agouti, a rodent that resembles a large, tailless rat."

"An obstacle course with Tarzanesque leaps from ropes depleted his stamina. A predawn swim in caiman-inhabited waters tested his nerves. Drinking dirty river water disgusted him." 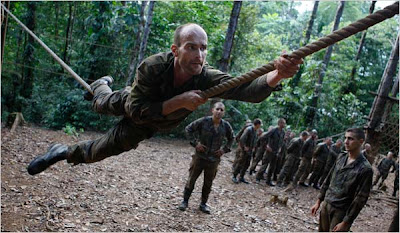 “'I am just exhausted,' the gaunt Mr. Baird, 30, said, before faintly uttering in French, 'Fatigué, fatigué.' But when asked why he joined the legion a year ago, his eyes lighted up a bit as he described an apparently dreary past life as a truck driver in Virginia."

“'I wanted to see the world and learn some French,' he said"

“'There are easier ways to learn French,' said Lt. Col. Daniel Kopecky, an officer in the French Army who was observing Mr. Baird’s predicament."

Stiven, an American in the French Foreign Legion [FFL], is having a hard time? A man his age, without prior military experience, COULD be expected to have a hard time! And yes, there are easier ways to learn French! What is it, the FFL requires each recruit to learn a vocabulary of about 300-400 French words and that is that? How fluent do you become?