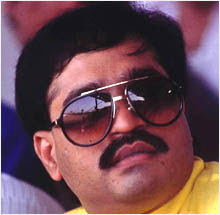 Here is the man now being scrutinized very carefully in the aftermath of the terrorist attacks in Mumbai.

"Dawood Ibrahim (Urdu: داوود ابراهيم), b. December 26, 1955, also known as Dawood Ebrahim, and Sheikh Dawood Hassan, birth name Sheikh Dawood Ibrahim Kaskar, is the head of the organized crime syndicate D-Company in Mumbai. He is currently on the wanted list of Interpol for organised crime and counterfeiting. He was No. 4 on the Forbes' World's Top 10 most dreaded criminals list of 2008."

And, of course, wouldn't you know it about a gangster: "Dawood Ibrahim, the son of a police constable Ibrahim Kaskar"!!?? Well, of course.

Indian gangster now residing in Karachi? Headed a criminal organization called D-Company [Dawood Company I suppose!]. A mafia-style organization based in Mumbai but having tentacles throughout all of India.

A man, Dawood, who had to flee India, but still controlling his criminal enterprise from exile. And NOW BRANCHING OUT INTO TERRORISM AS WELL??!!

"MUMBAI: The merger of Dawood Ibrahim’s gang with the Lashkar-e-Toiba at the behest of Pakistan’s Inter Services Intelligence (ISI) has Indian security agencies worried since the underworld gang will expand the ISI’s reach in the country."

“Many members of Dawood’s gang have been indoctrinated and trained in the use of weapons in the Bahawalpur centre of the LeT near Lahore . . . Asked why the ISI had roped in the D-Company in LeT activities, the official said, 'The underworld’s penetration in Maharashtra, Gujarat, Karnataka, Andhra Pradesh and parts of Kerala and Tamil Nadu is very deep.'"

Right! It is NOT unusual for intelligence services, regardless of nationality, to utilize the services of organized crime figures, criminal syndicates, blackguards, etc.

An "apparatus" is already in existence that can be availed thereof! An "apparatus" that already operates "below the radar screen", so to speak. Semi-clandestine in nature, and having a membership of persons that already have a marked tendency to break laws, using violence when needed, scofflaws!

American intelligence during World War Two, as part of the effort to saveguard the docks of New York City, sprang the gangster Lucky Luciano from prison, as part "of a deal"! "Guard the docks [the criminals already having an "apparatus" in place on the docks to steal!], and we will let you go!" This was the refrain.

At this point in his "career", Dawood is relatively unconcerned with profits and money from his various enterprises? POWER and the ability to wield power on the world stage is what this man desires now?

What was once ONLY a criminal enterprise now has become jihad for Dawood!!??

dawood has always been a jihadi, the 93 bombings and subsequent riots in mumbai and all over india where orchestrated by him. (in an apparent retaliation to the reconquista of the babri mosque by Hindu Nationalists)

he also had a falling out with his former aide and notorious hindu criminal named Chotta Rajan who split with dawood after the bombings, accusing him of being anti-hindu.

so yes, dawood has always been a jihadi islamic criminal.