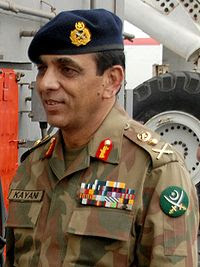 Here is the Pakistani general officer named just recently by Newsweek as "one of the 50 most powerful people in the world":

"One of the 50 most powerful people in the world"!!

[of the fifty most powerful people in the world, only two military men were named. One was Kayani and the other was General Petraeus.]

Fortunately for the Pakistani, and for the rest of the world for that matter, a man who does not seem to be a man absorbed with politics and desiring political power of the dictatorial way!

* "He grew up in a working-class family"

* "son of a junior officer"

* "described as a soft-spoken intellectual"

Also served as an aide to Prime Minister Bhutto and is familiar with the civilian power structure and intrigues of Pakistani politics:

"Kayani rose to eventually serve Benazir Bhutto as her deputy military secretary during her first stint as prime minister in 1988-1990."

Has taken measures to make sure the Pakistani military remains apolitical, respecting the democratic process:

"In January 2008 General Kayani passed a directive which ordered military officers not to maintain contacts with politicians."

"General Kayani ordered the withdrawal of military officers from all of Pakistan's government civil departments." [military men had been embedded into all civil departments to "keep an eye" on things!!]

"The army fully stands behind the democratic process and is committed to playing its constitutional role."

NOT to engage in intrigue, coup de etat, etc. [four times the Pakistani military has staged a coup and overthrown the democratically elected government!!]

This too is the man that met with Admiral Mike Mullen aboard the aircraft carrier Abraham Lincoln earlier this year. The purported meeting was to discuss American cross-border raids from Afghan into Pakistan. Violation of Pakistani sovereignty and ordinarily an act of war!! Acts of War ordinarily not countenanced by a sovereign power! Kayani and Mullen had a fruitful discussion with a modus vivendi being reached?

"modus vivendi –noun - - 2. a temporary arrangement between persons or parties pending a settlement of matters in debate."

Kayani is NOT in an enviable position. In my opinion Pakistan is one of the two most worrisome places on earth. The second being Saudi Arabia. If either one of those two nations goes under, from chaotic conditions, being followed by an Islamic fundamentalist take-over, the entire world will be in grave danger.

Pakistan HAS NUCLEAR WEAPONS IN ITS POSSESSION AND THE TECHNOLOGY TO DELIVER SAME. AND THE ABILITY TO PRODUCE MORE ATOMIC WEAPONRY ON AN ASSEMBLY LINE BASIS. [NOT EXCESSIVE NUMBERS, BUT STILL MAKE MORE ON A REGULAR BASIS!!]

Pakistan too has so much bad occurring all at once. Hard to know which problem requires tackling and with what priority. Internal revolt emanating from the Tribal Areas, Northwest Territory, Swat Valley! Indigenous revolting Pakistani, Taliban, foreign fighters of all persuasions. AND the endemic problems with India and the ever-lasting threat of war or low-intensity conflict over Kashmir. ALL THIS - - AND A NUCLEAR POWER TOO!!

Kayani is apolitical but has to walk a tight rope. I can see where Newsweek has a point in naming this man "one of the 50 most powerful people in the world"!

MOST OF ALL - - SAFEGUARDING THAT PAKISTANI NUCLEAR ARSENAL FROM FALLING INTO THE WRONG HANDS IS OF PARAMOUNT IMPORTANCE!!??

This man is totally qualified and able to do so? I think so.