More on the main supply routes [MSR] for the troops now fighting in Afghan. A hot topic that your reporter has commented on before.

NOW, A SITUATION NOT MERELY CONFINED TO THE ROUTE THROUGH THE KHYBER PASS. NOW A DETERIORATING SITUATION WITHIN AFGHAN ITSELF!!

Once again - - indicators - - that the war in Afghan is slowly but steadily bcoming to the disadvantage of the U.S./NATO troops?

You decide for yourself!

"U.S. forces have sharply increased the number of airdrop supply missions in Afghanistan in the past three years, as roads have become more dangerous and allied troops have established remote outposts."

"The number of airdrops has increased to 800 this year from 99 in 2005, according to Central Command's air operations center. Planes dropped 15 million pounds of cargo this year, nearly double last year's load of 8.2 million pounds."

These outposts are in rugged terrain on the border between Pakistan and Afghan. Fire bases and Forward Operating Bases [FOB] consisting of combat troops. Normally, at least during the Vietnam era, a fire base would be a battery [6 guns] of artillery, poised to support ground troops within range of the guns.

These fire bases and FOB are located in areas of Afghan where MILITARY CONVOYS TRAVELING BY ROAD ARE TOO SUSCEPTIBLE TO AMBUSH, MINING, SNIPING, REMOTE EXPEDIENT EXPLOSIVE DEVICES, ETC. EVEN IF THE FIRE BASE OR FOB CAN BE REACHED BY ROAD, THE TRIP IS TOO DANGEROUS!
Fire bases and FOB, mainly, NOW, resupplied by airdrop! 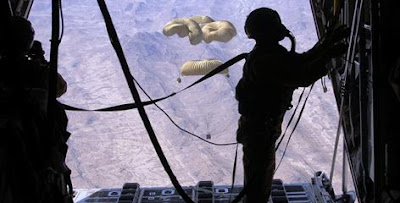 These fire bases and FOB are tempting targets for the Taliban and Al Qaeda. Deny these outposts aerial resupply through the use of pea-shooter shoulder-fire surface-air-missiles [MANPAD] of the SA-7 or Redeye variety and the U.S. troops are in a big hurt almost right away. Major battle will occur just to keep the bases sustained - - until a point is reached where occupation of the base will be prohibitive from the cost standpoint!

Afghan has always been a place that "swallows up" the invader? Historically has been so and is looking like that now too!

"The bottom line up front is that Pakistanis are protecting our lines of communication, and we have had no real effect in our logistics status here in Afghanistan because of that,"!