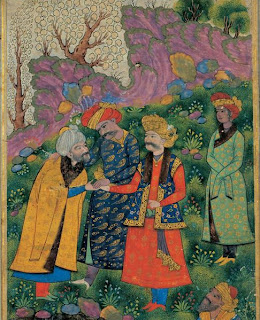 Back to Mahmud of Ghazni. A man - - undeniably - - a great conqueror? Starting in the year 1000, led numerous military expeditions against the various Hindu kingdoms and principalities of what is now India.

[Mahmud is in the orange robe in case you were wondering!!]

Depending upon your perspective, Mahmud is a great man worthy of praise [Muslim viewpoint], or a murderer, pillager, arsonist, rapist, slaver, a man who desecrates holy places [Hindu]!!

There is not an in-between with Mahmud!

"depictions of the historical Mahmud as either a hero or a villain by the polarization of nationalist or ideological orientations."

There also be no contesting that the man had a great impact on history.

Remembered in a manner that few appreciate.

"ETYMOLOGY OF THE WORD 'GAJO'"

"This was in India that a king named Mahmud Ghazni (Mahniud Ghaznvid) came and attacked India about seventeen times between 1001-1026 A.D. Mahmud Ghazni ruled from Ghazni, a city in Afghanistan . . . Mahmud Ghaznvi's first attack was in 1001 near Peshawar and he took away with him as many as 500,000 people as slaves . . . It is said about him that 'he [Mahmud] came, burnt, killed, plundered, captured and went' . . . The word Ghazi has become Ghazo or Gajo in the Romani language and is used to denote a non-Rom, non-Gypsy, a stranger as also a bad and dangerous nation"

"In his [Mahmud] last attack in 1026 he faced Lats from the Punjab. Those were the people who left their homes because of terror of Mahmud and became Gypsies or Roma in foreign lands. They developed a natural hatred for Ghazi, and that is why they called every non-Gypsy a 'Gajo' who had tortured and oppressed them."

During their migration from India to Europe and beyond, the Gypsies [Rom] have not forgotten, even after 1,000 years, Sultan Mahmud of Ghazni!!