Anti-state•anti-war•pro-market. Some most recent articles from the LewRockwell.com Internet web site and thanks to same.

2. "The Turkish Invasion of Rojava". 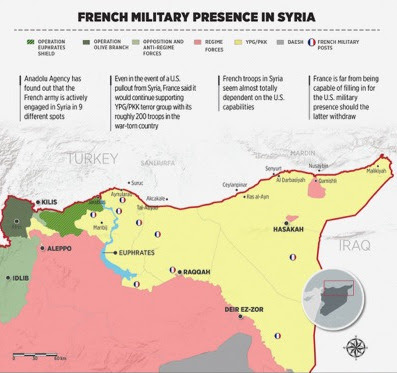 * Anadola Agency has found that the French army is actively engaged in Syria in nine different spots. * Even in the event of a U.S pullout from Syria, France said it would continue supporting YPG/PKK terror groups with its roughly 200 troops in the war-torn country. * French troops in Syrian seem almost totally dependent on the U.S. capabilities. * France is far from being capable of filing in for the U.S. military presence should the latter withdraw. Click on image to see a larger view.

Even with the U.S troops withdrawal from Rojava French troops will remain?

Hardly I need to remind France as with Turkey constituent members of NATO. Turks and French at odds also hardly a recommended situation.