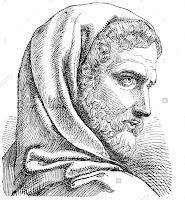 “What person has possessed the most outstanding courage is a subject of unending enquiry.”
- - Pliny the Elder.

The military man as a result of combat losing a limb. Subsequently being fitted with a prosthesis and continuing the fight and doing so quite successfully qualifies as an indication of great courage and will!

Thanks once more to the Professor Al Nofi CIC #475:

". . . nobody, in my judgment [Pliny] at all events, can rightly rank any human being above Marcus Sergius, albeit his great-grandson Catilina diminishes the credit of his name.

"Sergius lost his right hand in his second campaign. By the end of two further campaigns, he had been wounded twenty-three times, with the result that he was crippled in both hands and both feet, only his spirit being intact; yet although disabled, he served in numerous subsequent campaigns."

Sergius even when disabled fitted with a prosthesis and continuing to fight in the thick of the fray.

"Sergius had a right hand of iron made for himself and going into action with it tied to his arm, raised the siege of Cremona [c. 206-207 BC], saved Piacenza [209 BC], captured twelve enemy camps". .

From more modern times two instances of military men, aviators both, fitted with prosthesis and continuing to engage in mortal combat with the enemy, and most successfully so.

PRIOR TO THE WAR BADER HAS LOST BOTH LEGS WHILE PERFORMING AEROBATICS. WAS RECALLED TO FLIGHT STATUS WHEN WW2 BEGAN AND FLEW MOST COURAGEOUSLY UNTIL HIS CAPTURE. AS AN ACT OF CHIVALRY THE GERMAN ALLOWING THE RAF TO DROP SPARE PROSTHESIS TO BADER DURING HIS CAPTIVITY.

"Hans-Ulrich Rudel . . . was a German ground-attack pilot during World War II. Rudel was the most decorated German serviceman of World War II"

"On 8 February 1945, Rudel was badly wounded in the right foot, and landed inside German lines . . .  Rudel's leg was amputated below the knee. He returned to flying on 25 March 1945. He claimed 26 more tanks destroyed by the end of the war."

ONLY SIX WEEKS AFTER LOSING THE LOWER HALF OF HIS RIGHT LEG RUDEL BACK AT THE CONTROLS AND FIGHTING UNTIL WARS END, QUITE VALIANTLY SO!

Some may take exception as to the inclusion of Rudel but I am taking only into account the military man who receiving a grievous wound and yet continues to fight with prosthesis.