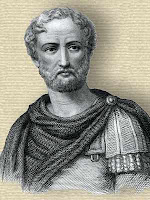 “What person has possessed the most outstanding courage is a subject of unending enquiry.” - - Pliny the Elder.

Thanks to the Strategy Page CIC # 475 article by Professor Al Nofi, as extracted and heavily edited.

That most outstanding individual Roman soldier of antiquity according to Pliny:

"'. . . nobody, in my judgment [Pliny the Elder] at all events, can rightly rank any human being above Marcus Sergius, albeit his great-grandson Catilina diminishes the credit of his name.'"

"'Sergius lost his right hand in his second campaign. By the end of two further campaigns, he had been wounded twenty-three times, with the result that he was crippled in both hands and both feet, only his spirit being intact; yet although disabled, he served in numerous subsequent campaigns'".

Consider from much modern times [WW1 and WW2] military commanders as wounded repeatedly yet continuing to lead from the front. Individuals for better or worse to include:

Bernard Freyberg also during a time of war sustaining non-combat related injury all the while suffering a heart ailment??

Some may take exception to the inclusion of Oscar Dirlewanger but I speak only of repeated wounding and nothing more.