Here is a New Zealand jihadist and follower of the Islamic State who is not only asking to be on the receiving end of a Hellfire missile as fired by drone but is giving his exactly geographic coordinates for targeting purposes. 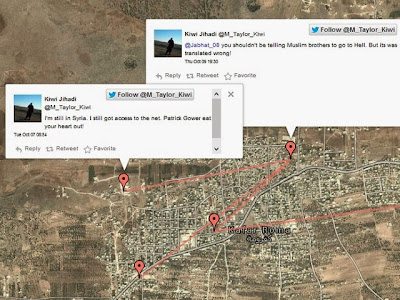 An example of how the usually savvy and Internet aware ISIL may find their use of social media to back-fire literally on them with disastrous consequences.

"New-Zealand English teacher-turned-terrorist Mark Taylor, who shot into the public eye last year after publicly burning his Kiwi passport and then asking for a new one has blundered again by apparently forgetting to turn off geo-location services on his smartphone while tweeting from Islamic State safe houses in Syria."

"The terrorist, who changed his name to the more appropriate-sounding ‘Abu Abdul-Rahman’ uploaded a series of tweets during his travels across the Islamic State, updating his twitter following on his progress with ISIS. The Daily Mail reports a Canadian jihad-monitoring group recorded 45 of these tweets containing geo-location data and passed the information on to intelligence agencies."

Absolutely! Each and every time you use certain cell phone or Internet social media connections your location is transmitted with the "tweet" or cell phone conversation and recorded, quite often intercepted and examined by unintended recipients. Such as in this case.